Day 1: Kutaisi – Bagrati – Gelati – Motsameta – Kutaisi
Arrive at Kutaisi International Airport. Meet your guide and drive to Kutaisi. Check-in to the hotel on arrival.
After breakfast start sightseeing in the second biggest city of Georgia – Kutaisi, which according to the legend was the ultimate destination of the Jason and Argonauts searching for the Golden Fleece. Visit Bagrati Cathedral (11th century), one of the best samples of medieval architecture towering over Kutaisi and visible from almost any point in the city. Next stop is the Gelati Academy built by King David the Builder in the 12th century. Gelati was the center of spiritual and scientific life of the Middle Ages, the tomb of Georgian kings and a cult place for pilgrims. It is under UNESCO protection as an object of cultural and historical legacy. Continue to Motsameta Monastery to enjoy fantastic views over the Rioni river gorge. Drive back to Kutaisi to overnight at the hotel.

Day 2: Kutaisi – Prometheus Cave – Mestia
In the morning, drive to the Prometheus cave, where you will walk in a 1.5 km long tunnel and enjoy breath-taking views of stalactites, stalagmites, petrified waterfalls, underground rivers and lakes along the cave. The underground light system is filled with LED lights of all the colours of the rainbow, marvellously highlighting the natural beauty of the Prometheus Cave. In the afternoon, head to mysterious Svaneti passing through the Inguri Gorge. This region is the birthplace of the Svans, a unique ethnic group, who are distinguished by their amazing old culture and traditions. Svaneti is also famous for its original and authentic architecture and is dubbed “the land of thousand towers”. Those towers used to play an important economic and defensive role in the history of Svaneti. There are still dozens of the towers – stone houses from the Middle Ages with fire watchtowers and churches from the 10-14th centuries. In the evening visit the Mestia Ethnographic Museum, with an original Svan house “machubi” and “koshki” tower. Overnight at the hotel.

Day 3: Mestia – Ushguli – Mestia
After the hotel breakfast drive to Ushguli village, the highest standing settlement in Europe (2200 m). The Ushguli architectural complex is a valuable architectural and historical monument, included in the UNESCO World Heritage List for its exclusiveness. There are about 70 families (around 200 people) living in Ushguli. Spend time in Ushguli strolling through the old narrow streets. Visit Lamaria Church complex with impressive 12th century wall frescoes. Locals believe that Queen Tamar was buried under this church. Enjoy picturesque view of the Mount Shkhara. Return to Mestia. Overnight at the hotel. 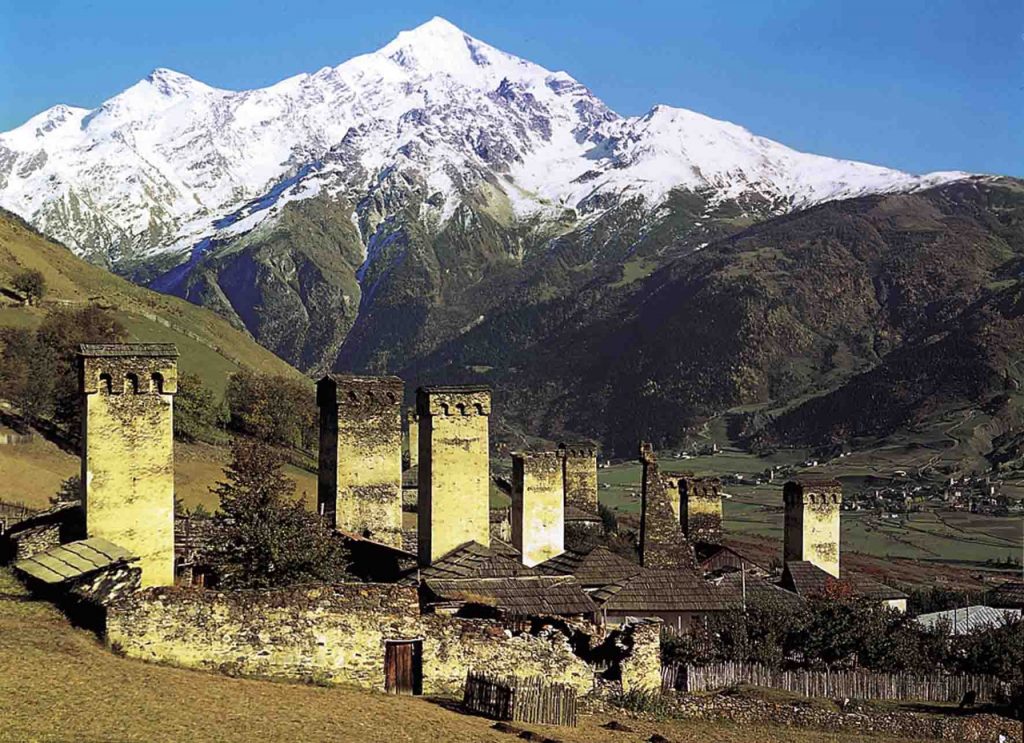 Day 4: Mestia – Zugdidi – Batumi
After breakfast drive to Batumi. On the way, stop at Zugdidi, the regional centre of two united historical areas of Georgia – Samegrelo and Svaneti. Visit a graceful patrimonial Dadiani palace is the city’s treasure testifying to its former significance. Next step at Petra fortress with green gardens beautifully overlooking the Black Sea. Arrive in Batumi. Free time. Overnight at the hotel.

Day 5: Batumi – Botanical garden – Gonio fortress – Tbilisi
In the morning, visit Batumi Botanical garden located on Green Cape with amazing views on the Black Sea. Established in 1880, the biggest and the oldest botanical garden in South Caucasus houses more than two thousand tree species. Return to Batumi for lunch. In the afternoon, visit Gonio fortress, the oldest citadel in Georgia. According to the legend this was the place where Apsyrtus, King Aet’s son killed by Jason, was buried.
At 17:55, take an evening train to Tbilisi, arrival at 22:50. Transfer to the hotel for overnight.

Day 6: Tbilisi City Tour
After breakfast, start exploring the capital of Georgia. Start at Holy Trinity Cathedral, one of the largest orthodox cathedrals in the world. Continue to Metekhi church and the monument to Vakhtang Gorgasali, the legendary founder of Tbilisi. Take a cable car to Narikala Fortress to enjoy breathtaking panoramic view of the city. Walk down to the district of Sulphur bath houses passing by the only mosque in Tbilisi. Stroll through the Sharden area full of narrow streets with cozy cafés, wine tasting bars, souvenir shops, and breathe in the living past. Visit Sioni Cathedral, Anchiskhati Basilica, and the clock tower of famous Rezo Gabriadze Theatre. Cross the Bridge of Peace to Rike Park. Free time in the city center or transfer to the hotel. 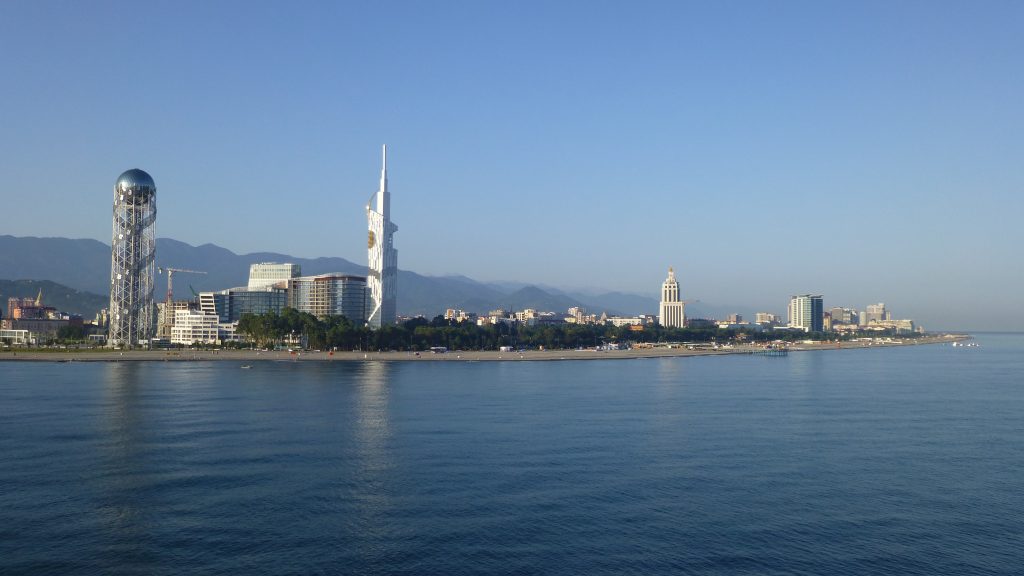 Day 7: Tbilisi – Telavi – Tsinandali – Alaverdi – Napareuli – Telavi
After breakfast depart towards the Kakheti region of Georgia, the cradle of Georgian wine. Beautiful road lies through Gombori pass. Our first stop will be in Telavi, the administrative and historic center of the region. Have a short walk through charming streets of old Telavi and have a photo stop at the monument to Erekli II. Drive to Tsinandali, the residence of dukes of Georgia with a beautiful English garden, museum, and the wine cellar, which belonged to prince Chavchavadze, 19th century public figure and poet. Continue to Alaverdi Cathedral, the second tallest cathedral in Georgia and an outstanding example of medieval Georgian architecture (11th century). Final stop for today is a private winery «Twins Wine Cellar» in Napareuli village. The premises of the winery include vast vineyard, museum of traditional Georgian winemaking in qvevri, and facilities for various workshops. Try yourself at baking Georgian bread puri, cooking national dessert churchkhela, harvesting and squeezing grapes for wine (subject to seasonality). An excellent round-up of the tour will be tasting five different wines made in a traditional way in qvevri, large earthenware vessels, at Twins Winery. Return to Telavi for overnight.

Day 8: Telavi – Gremi – Kvareli – Sighnaghi – Bodbe – Tbilisi
Continue exploring Kakheti region and Alazani valley. Check-out from the hotel and drive to Gremi architectural complex, 16th century royal residence and the capital of Kakheti Kingdom. Gloomy and monumental, the Gremi castle is one of the most visited tourist sights in Georgia. Next stop will be at a unique Winery Khareba located in the tunnel carved out of the rock. Originally built for military purposes, today the tunnel is used to store Khareba’s finest wines. Wine tour and wine tasting. Continue to Sighnaghi, the city of love and the Royal Town, one of the crossroads of the Great Silk Road surrounded by defensive walls with 23 towers. Depart to Tbilisi, making en-route stop at Bodbe Convent. The legend points that the burial place of St. Nino, who converted Georgia to Christianity in the 4th century, was here. According to the decree of Tsar Alexader III of Russia, since 1889 Bodbe complex has been functioning as a nunnery. Continue driving to Tbilisi. Drop off at your hotel. 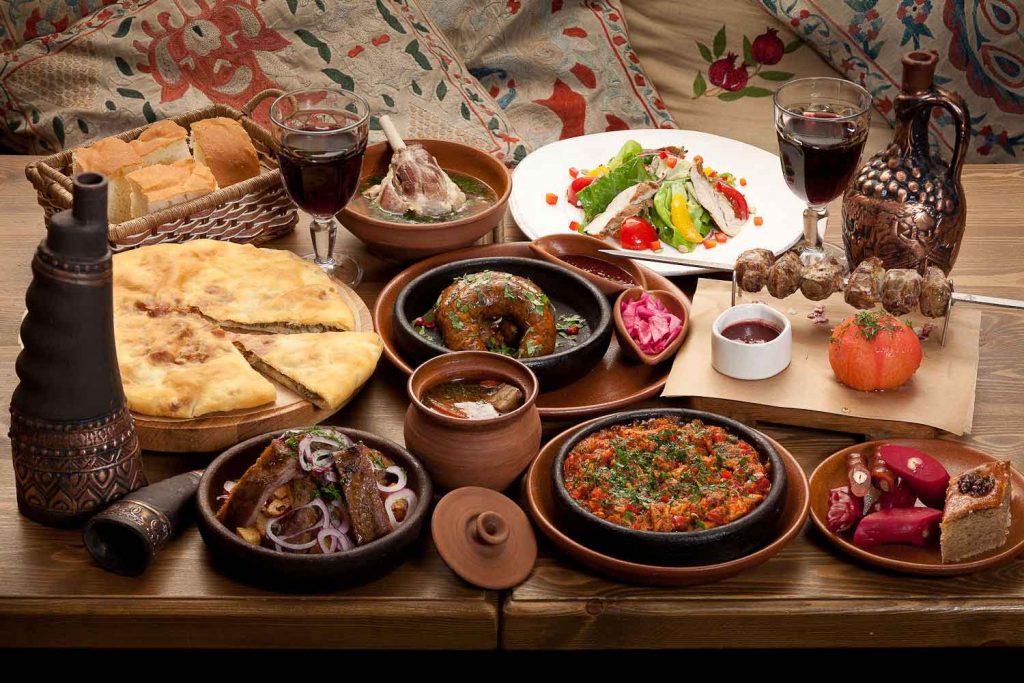 Day 9: Tbilisi – Mtskheta – Ananuri – Kazbegi
After breakfast, drive to Mtskheta, one of the oldest towns and the cultural and religious center of Georgia. Mtskheta was the capital of the Eastern Georgian Kingdom of Iberia from the third century BC. Visit Jvari Church, a true architectural masterpiece of the early Medieval Period built on a hilltop. You will enjoy the views of the confluence of Aragvi and Mtkvari rivers. Visit Svetitskhoveli, the main cathedral of Mtskheta and a sacred place where the robe of Christ is being kept. Continue to Ananuri architectural complex, a former residence of Argveti Dukes. The complex features churches and towers, dating back to the 16-17th centuries, beautifully overlooking the Jinvali reservoir. Arrive in Kazbegi, a small town with the views of Mount Kazbek (or Mkinvari) 5033 m, the seventh highest peak in the Caucasus Mountains. Arrive in Kazbegi, change the car to 4×4 WD vehicle and drive to Gergeti Holy Trinity Church located at an altitude of 2170 m. You will enjoy breath-taking views to the Mount Kazbegi (Kazbek or Mkinvari) 5033 m, the seventh highest peak in the Caucasus Mountains. Overnight at the hotel.

Day 10: Kazbegi – Gori – Uplistsikhe – Kutaisi
Breakfast at the hotel. Drive to Gori and visit the Stalin Museum. The museum includes more than 60,000 artefacts, the tiny house where Stalin was born, and impressive bulletproof train Stalin used to travel to Yalta and Potsdam. Explore the cave town Uplistsikhe dating back to Hellenistic Period and notable for the unique combination of various styles of rock-cut cultures and the co-existence of pagan and Christian architecture. Drive back to Kutaisi. Check in to the hotel for overnight. 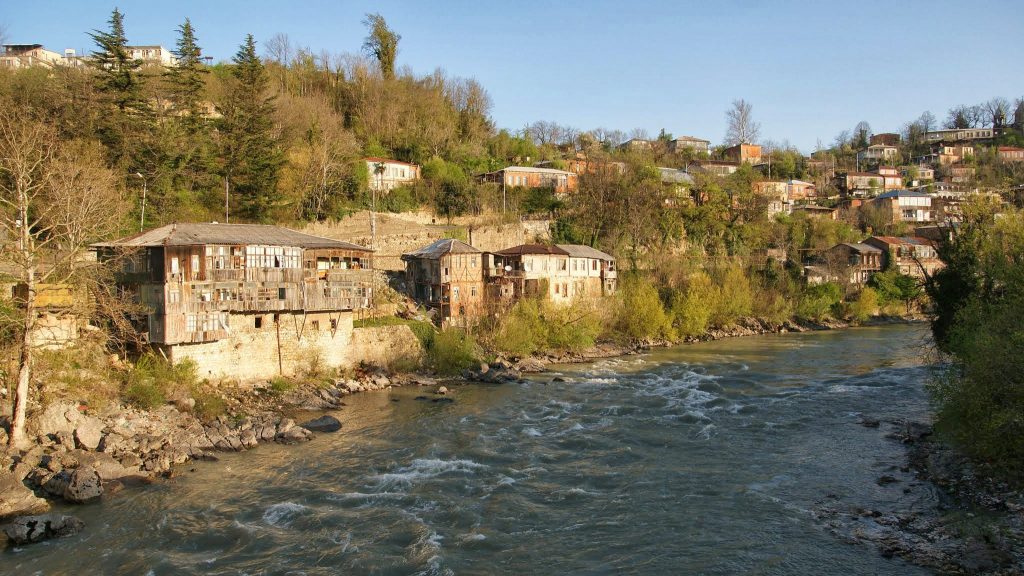 Day 11: Kutaisi – departure
Check-out from the hotel till noon. Transfer to Kutaisi International Airport. End of the tour. 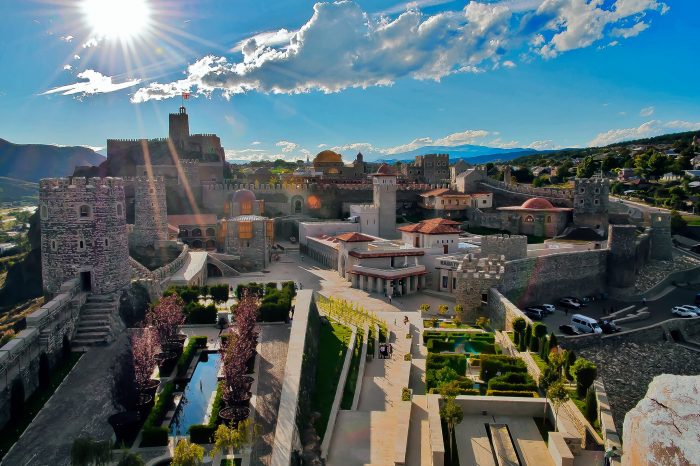 The short, but picturesque tour through the sites of Georgia, which are located a bit out of the main touristic routes and can be easily missed while on a “popular” routes. 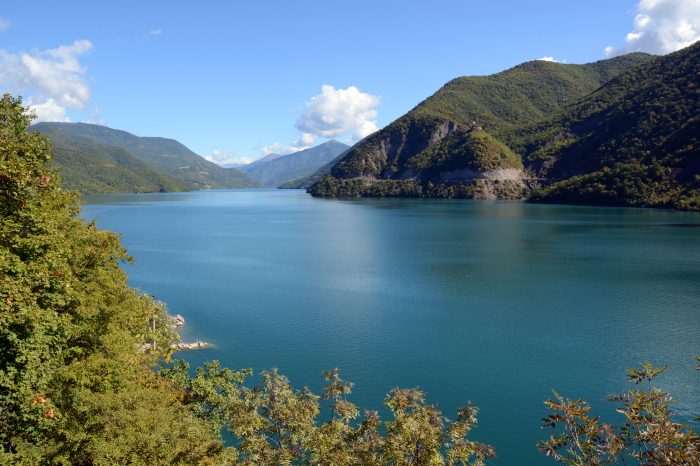 Round Trip through Legendary Places

From Kutaisi to Tbilisi and back in 6 days 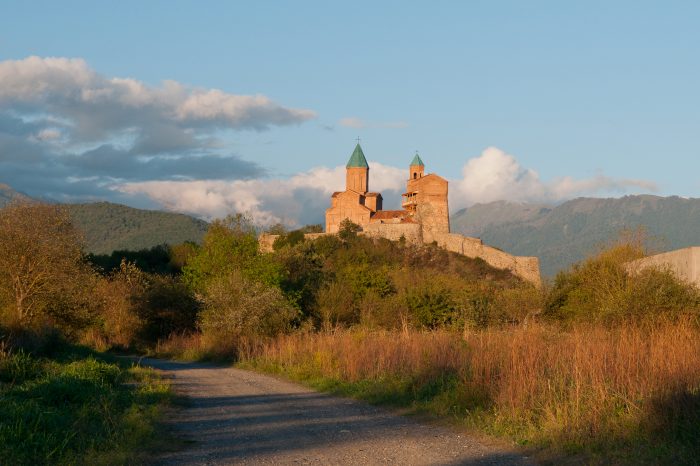 The long journey through Georgia

Almost two weeks of fascinating views and inspiring culture throughout the whole Georgia!

Wine, caves, castles await you during our 8 days trip through Georgia. History and ancient architecture, mixed with breathtaking landscapes of snow-topped mountains and green valleys!