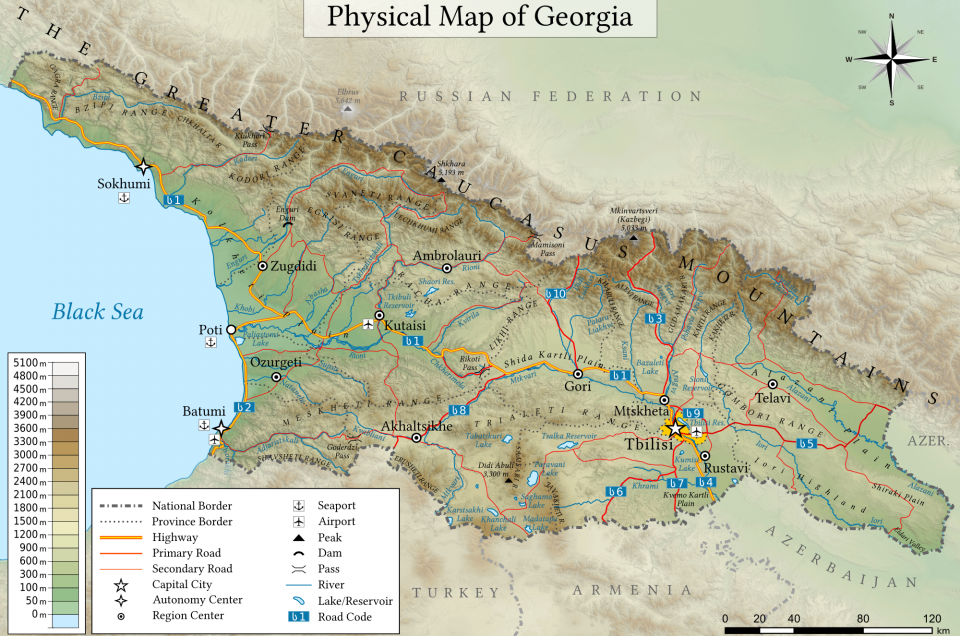 Georgians call their country Sakartvelo. The name consists of two parts: Kartveli, which refers to an inhabitant of the core central Georgian region of Karli-Iberia, and the circumfix sa-o is a usual geographic for indicating the “land where Kartveli live.” It’s not known where the English name of the country came from, though there is a theory that might explain it. St. George is believed to be the patron saint of Georgia, and thus the name might have been coined by Christian reformers in the Middle Ages.

2. The first Europeans come from Georgia.

An archeological expedition in Dmanisi found the oldest human skulls in the Caucasus, suggesting that a man from Africa traveled to Europe through Georgia. The 1.8 million-year-old skulls are the remains of a human couple of Georgians called Zezva and Mzia. It is without a doubt that Georgia is a homeland of the first European.

3. It’s the cradle of winemaking.

Georgia has been producing wine for at least 8,000 years and is considered to be the birthplace of the beverage. The production of the wine was accidental. The grape juice poured in a shallow pit and was buried under the ground, turning it into wine. UNESCO has listed the traditional Georgian winemaking method – in a clay jar called a Qvevri – on its Intangible Cultural Heritage of Humanity list.

4. No one speaks the Georgian language except for Georgians.

The Georgian language among 14 unique languages in the world and has its own alphabet. Georgian script used to be three different languages throughout its existence – Nuskhuri, Asomtaruli, and Mkhedruli. The one that Georgians use today is the latter and has 33 letters.

5. It is one of the most ecologically diverse places in the world.

Georgia has 12 different climate zones, ranging from subtropical to alpine to semi-desert, and has 49 types of soil. This makes Georgia one of the most ecologically diverse countries on Earth. In addition, many of the most exciting animals like leopards, lynxes, and bears reside in the dense forests of the country.

6. It has a number of UNESCO World Heritage Sites.

There are three cultural sites listed on UNESCO’s World Heritage list: an ancient city and former capital Mtskheta, the massive cathedral complex Gelati Monastery, and the mountainous region of Upper Svaneti, while 15 other sites are on a tentative list.

7. It has Europe’s highest permanent settlement.

The villages of Bochorna and Ushguli are the highest permanent settlements in Europe at 2,345 and 2,100 meters above sea level, respectively. Both are mountainous regions where summer is short and winter is snowy and breezy.

8. There is a Georgian song in space.

“Chakrulo,” a Georgian folk song usually sung at festivals and celebrations, was sent into space on the spacecraft Voyager. The Golden Record has 116 images, different natural sounds, traditional music from various countries, and spoken greetings in 59 languages. It’s like a message in a bottle, a welcome for any prospective life forms that may come across the probe.

Mtskheta and Kutaisi, both former capitals of Georgia, are among Europe’s 16 oldest cities. Kutaisi, located in the western Georgia, was the capital of the Kingdom of Colchis – the ancient region of southern Caucasus where people lived as early as the second millennium BC. Compared to Kutaisi, Mtskheta is not as old and was founded about 3,000 years ago.

10. It is known for its polyphonic folk music.

Georgia is known for its choral folk music, catching the attention of UNESCO which listed it on the Intangible Cultural Heritage of Humanity list in 2008. There are three different types of polyphony: complex common in Svaneti, polyphonic dialogue over a bass background known in eastern Georgia, and contrasted with three partially improvised sung parts common in the west.

11. It is home to one of the oldest Jewish communities.

The Jewish community in Georgia is one of the oldest communities in the world. It’s divided into two groups – Georgian Jews have lived here for 2,600 years, while Ashkenazi Jews came in the 19th century.

12. It is an undiscovered heli-ski destination.

Abundant powder, spectacular views, and wide open slopes make Georgia’s ski resort Gudauri an excellent destination for heli-skiing and freeriding lovers. Gudauri is up-and-coming ski destination without the crowds of other European resorts. And even if you are not an adrenaline junkie, Gudauri still offers great slopes for skiers and snowboarders.

13. The name Tbilisi derives from the Georgian word for warm.

The name of the capital Tbilisi is linked to natural hot springs that were discovered during King Vakhtang’s hunt in the 5th century AD. The word “tbili” in Georgian means warm, while “Tbilisi” would translate as “warm location.”